Follow Alice down the the underland where you’re met with giant mushrooms, green plants and a smoking centipede. In this slot you’ll get to follow Alice as she goes on adventures with the white rabbit on the quest to find a way back up. White Rabbit is based on the famous child books written by Lewis Carroll. The slot contains many unique and innovative features like MegaWays and Feature Drop which you’ll only find in Big Time Gaming slots. The bonus also has potential of paying insane amounts upwards of ten thousand times your stake. If you want to try a couple of spins you’ll find this slot on most casinos that offers BTG.

Follow the white rabbit, hes going to show you the way to the underland where we meet crazy figures and find hidden treasures. In the underland we find beautiful surroundings with green trees, colorful flowers and giant mushrooms. The underland also has talking animals and living plants.

The slot consists of 5 wheels and uses the unique feature from Big Time Gaming called MegaWays which means that the Paylines is different for every spin you make. The coin value ranges from 0.2 euro all the way up to 100 euro per spin and there are tons of different bet levels so that you can easily find the one that you feel comfortable with and fits your current balance.

As soon as you open this game you’ll be sent to the underworld based on the famous tales about Alice in the underworld. The theme is entirely based on child tales originating from England. On the wheels we find minerals in different colours and shapes acting as the premium symbols, we also have the queen herself which is the best symbol of them all. When it comes to the low paying symbols we have the classical A, K, Q, J and 10. As previously mentioned the game uses the Big Time Gaming featured called MegaWays which means that the paylines changes from spin to spin which gives you great potential for big winnings. The slot contains several features such as Feature Drop, MegaWays, a random feature and a free spins bonus.

The Random feature can be triggered at any moment in the base game, the centipede on the left side will then blow smoke on the wheels adding Wilds, how many he adds is completely random. He can add multiple on the same spot giving the wilds Multipliers.

As for the bonus feature, it can be triggered by either buying the bonus via Feature Drop or hitting three Scatters in the form of White Rabbits on wheel 2, 3 and 4. You’ll then be awarded 15 Free Spins. In this bonus, you want to collect Cupcakes which expands the reel you got it on. If you manage to expand your reel up to 12 rows you’ll get a retrigger and the reel will turn into a better reel with higher chances of getting the queen. You can expand all five reels giving you five retriggers. Each retrigger gives you between 2 and 12 extra spins. 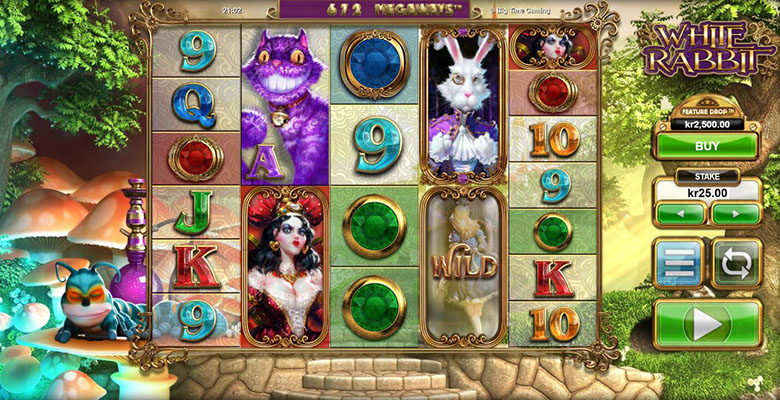 The background of the slot is beautiful with lovely green plants, giant mushrooms, colorful flowers and some of the characters from the story. The sun shines down from an distance giving the surroundings a golden shine. As for the graphics and the animations, they’re very high quality and well done as expected from Big Time Gaming. The music playing when spinning the wheels also gives you that cozy feeling when playing. Once you get into the bonus the music changes up to an faster version giving you that excitement in the anticipation for big winnings.

If you enjoy the stories about Alice in the wonderland you’re going to love this slot. The theme and the slot contains many of the elements and characters that Alice encounters when shes down in the underland. The slot has many interesting and unique features and the potential is just as high as you’d expect from a Big Time Gaming slot. The bonus can pay out upwards of ten thousand times your stake if you’re lucky. Overall the slot has an awesome theme, great graphics, fitting music and interesting features. If you enjoy Big Time Gaming slots and you haven’t tried this one out yet we strongly recommend you grab a bonus from any of our lists and try a couple of spins!