This slot from Net Entertainment takes us back to the old Nordic gods and their fantastic world and all the symbols in this slot is things we associate with this time period. This slot contains many different exciting functions such as Expanding Wilds, Free Spins and a Bonus Feature that contains three progressive jackpots that have an history of paying out millions over the past few years. Hall of Gods is to this day one of the best and most popular slots Netent has created and it contains everything that you could ever want from a slot, an awesome theme which takes us back to the nordic gods combined with really exciting features, bonuses and massive jackpots!

About Hall of Gods

Hall of Gods takes us on a journey back to the old nordic gods and their fantastic world. In Hall of Gods every spin is just as dramatic and exciting as you can expect from the theme. There are tons of amazing functions and if you’re lucky theres also three progressive jackpots hidden behind the wheels. The biggest jackpot can grant a lucky player amounts of multiple million dollars.

The slot consists of 5 wheels with 3 rows and a total of 20 playable paylines. You can change the coin value as you please between 0.01 Euro – 0.50 Euro and there are five different bet levels. This means that you can change your values more precise and according to how much you want to bet per spin with a minimum bet of 0.2 all the way up to 50 per spin.

In Hall of Gods you’ll find tons of different exciting special functions such as expanding Wild symbols, scatter symbols and a bonus game with the chance of winnings up to millions of dollars. All symbols and bonus features follows the slots theme. Hall of Gods contains a Wild symbol in the form of a snake which helps you build paylines and replaces all other symbols except for the Scatter and bonus symbol. The symbol can be both expanding and stacked which means that it can either cover the entire wheel or have it stacked which means multiple symbols on the same spot.

We then have the Scatter symbol in the form of two ravens, presumably Hugin and Munin, three of those gives you the free spins feature where all wins are multiplied by 3. For three Scatters you get 10 Free Spins, 4 gives 15 and 5 gives 20. This feature can be retriggered by hitting three more Scatters on the same spin under your Free Spins.

Lastly we have the bonus function which activates if you get three bonus symbols in the form of a hammer, if this happens you’ll be forwarded to a new game screen filled with different shields and it’s here you’ll find the three jackpots hidden. In total there is 15 different shields and your task is to break those to see whats hidden behind. There are coin wins aswell as the Mini, Midi and Mega jackpots and when you’ve collected three of the same symbol the bonus ends and you win that amount or jackpot. 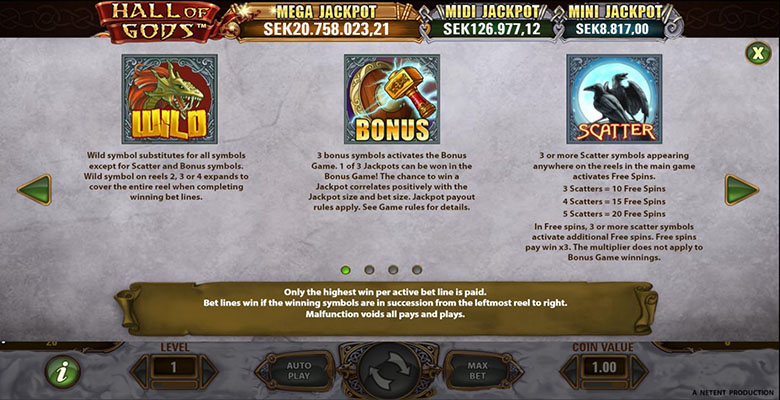 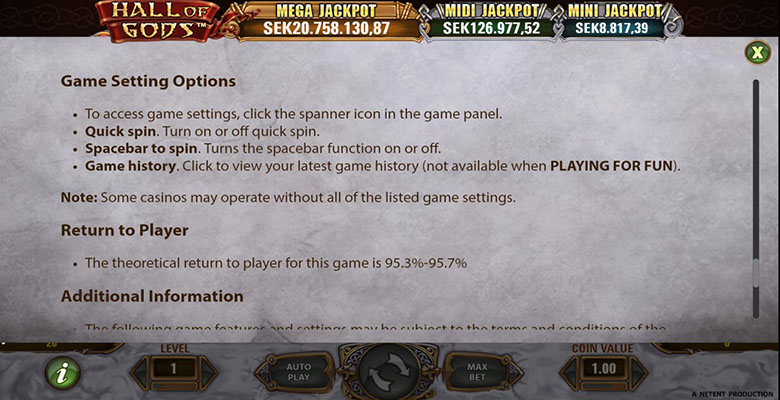 One of the best things about this slot is the three awesome jackpots which is hidden behind the wheels inside the bonus feature. The jackpots are called Mini, Midi and Mega and they’re progressive which means that they are being built up by all the players who are playing the slot until eventually one lucky player takes it all home. The progressive jackpots are networked so all casinos that offers Hall of Gods has the same jackpot. We strongly recommend checking out Live Casino Games to read more about how Jackpot slots work, we’ve also listed all the most popular jackpot slots right now and links to where you can play them, including Hall of Gods.

This slot is one of the best slots Netent has released and it’s still one of their more popular ones, it contains everything you could ever want from an slot, an awesome theme which takes us back to the nordic gods together with exciting bonus features, functions and three progressive jackpots which can make you filthy rich in just a matter of seconds. Hall of Gods has a nice and simple design and the graphics might seem a bit outdated but they’re still really good even after todays standards. This is a great beginner slot for anyone who is new to casinos or slots in general and it contains most of the popular features and functions slots has these days which is a great intro to learning how slots work. We strongly recommend this slot and even though it’s quite old now it’s still one of netents greatest works.