Are you a fan of horror games? Then Halloween Jack is definitely something you should check out. Halloween is right around the corner and what better way to celebrate it than to play some newly released Halloween games? Halloween Jack is a remake of the old and popular slot Jack and the Beanstalk which has been popular for many years now. The slot contains interesting features such as Walking Wilds and a bonus feature with three unlockable Wilds and great potential for completely insane winnings. Halloween Jack hasn’t been released yet but is expected at the end of October. You’ll find this slot at all casinos that offer NetEnt Gaming.

Halloween is closing in and what better way to celebrate it is there than a brand new horror-themed slot? Halloween Jack is NetEnts latest slot which will be released now in October and according to NetEnt this will be their scariest slot ever. Halloween Jack is based on the famous tales about Jack’o Lantern and the Headless horseman.

The slot consists of 5 wheels with 3 rows and a total of 20 playable paylines. You can change the bet level as you please between 0.2 Euro – 50 Euro per spin and there are many different bet levels. This means that you can change your bet level more precise according to your balance and how much you’re comfortable betting.

Halloween Jack is based on the famous tales Jack’o Lantern and the Headless horseman which you’ve probably heard about, they’re very common around Halloween. The game is almost an exact replica of their previous game Jack and the Beanstalk but with an new theme. On the wheels we find creepy thing normally associated with Halloween and these tales such as Black ravens, horse shoes, blood-thirsty bats and a horse. We also have the devil girl which is the best symbol of them all. These different symbols acts as the premium symbols, as for the lower paying symbols we have A, K, Q, J and 10 in silver with creepy hands covering them from the sides. The slot has two special features, the Walking Wild aswell as the Free Spins Feature. Whenever you hit a Wild symbol in the base game you trigger the Walking Wild Feature which means that it’ll jump one step to the left and give you a Re-Spin until it finally jumps off the wheels. So if you get it on the fifth wheel you’ll get 5 Re-Spins with the chance for awesome winnings on the way.

As for the bonus feature, it’s very similar to the bonus in Jack and the Beanstalk, only with changed symbols. You need three chest Scatters to trigger the bonus, you’ll then get 10 Free Spins. Inside the bonus feature you want to collect the key on the last row, for every third key you collect you upgrade your Wild to an bigger and better one. The Walking Wild feature is also active in this bonus feature which means that if you hit an Wild you’ll get extra spins with extra chances of hitting more keys. When you’ve unlocked all 9 keys you get the best Wild which is Wild Reels, this gives you the chance for really insane winnings if you’re lucky and hit many Wild Reels after eachother. 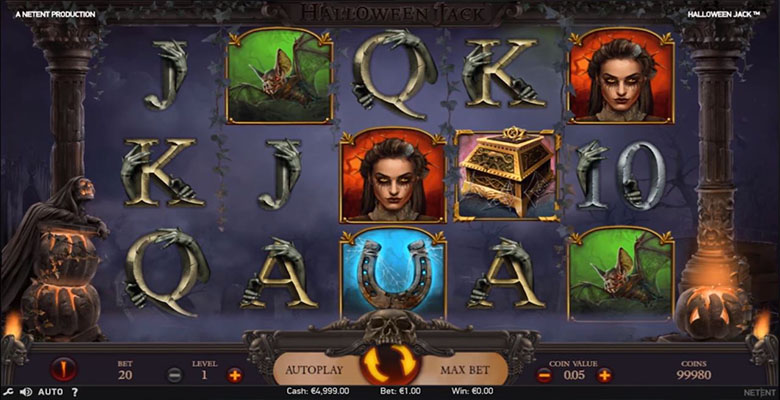 When people refer to Halloween Jack Bonus they might mean the bonus feauture within the game, but theres another type of bonus that you can use when playing called a casino bonus. This is something that you recieve from casinos and depending on the type of bonus you might recieve some money from the casino, some free spins or free money. Using a match bonus which is the most common one allows you to bet more, have longer sessions or simply get more money to play for. Casino bonuses greatly increases your odds against the casino and we strongly recommend you pick one up from one of our lists here at Slotsoo before you start hunting for those big wins you’ve always dreamt of.

Jack and the Beanstalk has been a classic from NetEnt for many years now and most people within the casino community probably knows about it or have tried it themselves. If you enjoy that game you’re definitely going to enjoy Halloween Jack, this is a remake of the old game with a brand new Halloween theme and upgraded graphics. The Walking Wilds feature makes the base game much more enjoyable and the bonus is very exciting with unlockable Wilds and an incredible potential for insane winnings. Even if we’re not a big fan of remakes from old slots, this is one that we can get behind. Halloween Jack hasn’t been released yet but will be in a week or two and we can’t wait to try it out!