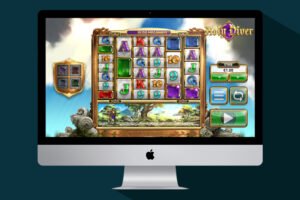 We’re finally into February which means that most of the stress from all the holidays is gone and most of us are just moving on with our normals days and the year progresses as usual. Within the casino industry alot of things have happened lately, some new rules within the UK industry has been changed and Sweden has gotten their own license which means that any casino that wants to offer services to Swedish players is required to have an Swedish license. Tons of new games has been released lately as usual, some that we’ve really been looking forward and some that we were taken by suprise from when they were released. In this list we’re going to go through our top four slot releases for this month.

Holy Diver is definitely one of the slots we’ve been looking forward to the most for this month, it’s Big Time Gamings latest release based on the famous song from Dio. Inside the slot we get to follow the knight as he goes on an adventure to defeat enemies. The wheels consists of giant diamonds and different letters, beneath the payfield we see the adventure himself as he walk aslong the way picking up chests as you spin. Inside the chests hides multiple features that can be triggered with great potential for winnings. The slot uses the MegaWays feature created by Big Time Gaming themselves giving the slot amazing potential for great winnings both in the base and the main game. All in all, an extremely fun slot that contains hours of entertainment and potential for massive winnings.

If you’re a fan of Yggdrasil or just been playing slots for quite some time you probably know about Cazino Zeppelin which is an old classic and finally it has gotten an updated and better release, Cazino Cosmos. The theme is set in the future with an utopian society. On the wheels we find multiple different characters and the red guy is the one that pays the most. The bonus in this slot works just like in the previous version with Sticky Wilds and an massive potential for great winnings. Over each wheel you’ll also find meters that fills up as you hit Wild symbols in the main game and each wheel has its own wheel bonus that will be triggered by filling up the meter to full. If you Cazino Zeppelin you’re going to love this one.

We’ve talked a little about how Quickspin likes to go back and forth between the high and the low volatile slots and it feels like they’re branching out becoming more of an overall provider compared to before when they focused on making lower volatile slots. Their latest Divine Dreams slot is absolutely fantastic with gorgeous graphics and it blows high volatility out of the water with potential to win upwards of 7 500 times your stake. The theme around the slot is a bit mystic and it seems like the slot is set in the middle of the jungle somewhere, this mystic definitely adds to the excitement of playing making it thrilling for each spin because you don’t know what might happen next. Great game from Quickspin!

One of the hottest news within the casino industry lately has been the Reactor slot from Red Tiger, everyone is talking about it and if you’re following YouTube channels or streams on Twitch at all you’ve definitely seen people play it. The slot has massive potential of winning you up to 5 000 times the stake and it’s incredibly fun to play. The slot has a robot-like theme and is set inside some kind of laboratory. On the wheels we find minerals of different colors and above the playfield we have all the different features that can be triggered with different kind of chain reactions. If you have not tried this slot out yet we definitely recommend you give it a couple of spins, one of Red Tigers better games in a long time.

That was everything for this month. Hopefully you’ve found a slot that you find interesting or maybe even a new favorite. This will be a recurring newspost which will be released every month as a summary of the best slots from that month. We hope that just as many new and exciting slots will be released until next month!

New Slots to try in January

The Hidden Gems with BIG Winnings!