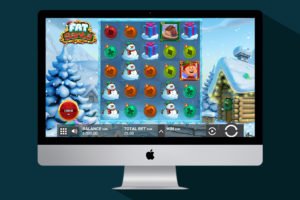 Ever since the casino industry exploded a couple of years ago there has been a massive increase of game providers which has resulted in more and more high quality slots releasing every day with new and interesting functions and features. It’s impossible to keep up with trying them all so that’s why we’ve decided to do this news post as an recurring post every month. Now theres not many days left until christmas and in many parts of the world it looks like it’s going to be a white christmas. During december there has been a ton of new slots with different christmas themes which is awesome and very fitting while waiting for christmas to sneak in around the corner. But december hasn’t just been new christmas slots but also tons of other exciting slots with awesome graphics, awesome functions and innovative bonus features. In this list we’ve chosen five slots that has stood out among the crowd and which we’ve enjoyed extra much.

First out is obviously an cozy slot with an fun christmas theme, it’s december after all and what would december be without christmas. The main person in this slot is Santa himself and here we get to follow his search for good pies. This is push Gamings latest release and it’s an remake of one of their popular slots from earlier by the name of Fat Rabbit. Fat Santa is played out in the woods by a small cabin surrounded by big mountains and the snow has settled like a big blanket on the surroundings. In this slot you want to hit Santa and a pie at the same time to trigger the bonus game, however, this isn’t the only way to trigger the bonus game, you can also buy the bonus feature for 80 times the stake. A really fun and sweet slot that fits extra well now in the end of December.

Enter a fabulous Christmas atmosphere on the wheels in this festive slot. The Nutcracker takes place on a large square and in the background you can see how the Christmas lights on the houses illuminate the dark evening while the snow falls slowly towards the ground. On the wheels we find presents and toys to be distributed to the children at Christmas Eve. The Nutcracker has several bonuses and fun features that make the slot entertaining and cozy to play down the sofa next to the fire. This is iSoftBet’s latest slot, a game provider that has been expanding lately with tons of high quality slots and we definitely think they have good potential to become one of the bigger providers if they keep going in the same pace.

Quickspin has lately been going back and forth between creating low volatile and high volatile slots and it feels like they no longer can decide what they want to do. Tiger’s Glory however, is a perfect slot which falls in the middle as an pretty medium volatile slot. This slot has fantastic graphics just like Quickspin is known for and it offers great potential in the bonus for really awesome winnings if you manage to hit many tigers on the wheel and collect the five extra spins on each wheel. All in all this game is very fun both in the base game and inside the bonus and it definitely deserves an place on this list.

Red Tiger kind of feels like a game provider you either love of hate, here at Slotsoo we definitely think their slots holds a very high standard and some of them can actually be very fun to play. Fruit Blox is a perfect example on such a slot. This slot has really cool graphics with awesome animations and the slot contains unique and exciting features with potential to win upwards of 10 000 times the stake. The bonus can give you up to 20 Free Spins and an random symbol converted to Wild. The base game might not be the most fun, but the bonus isn’t that hard to trigger so you usually don’t have to spend all too much time there. This is one of Red Tiger’s better slots this year!

Ice, Ice Yeti is a slot from NoLimit City, a game provider that most people don’t really know about. They’re still pretty new to the market but their slots holds a very high quality and is very fun to play. What makes their slot stand out among the crowd is their unique bonuses which we haven’t seen before. Many other providers like to recycle same old bonuses over and over so some new ones are definitely needed. Ice, Ice Yeti is a very fun slot with a fitting theme now during december and this slot has a pretty different setup. The game starts with a normal 3×5 setup with rows and wheels but when you spin you can remove the ice from the wheels above and under which expands the playfield up to 7×5 which gives tons of potential to cool winnings.

That was everything for this month. Hopefully you’ve found a slot that you find interesting or simply a new personal favourite. This will be a recurring newspost which will be released every month as a summary with all new slots that has been released. We hope that just as many new and fun slots will be released for next month!

New Slots to try in November

New Slots to try in January