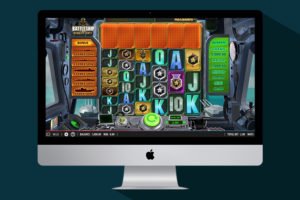 Ever since the casino industry exploded a couple of years ago there has been a massive increase of game providers which has resulted in more and more high quality slots being released every day with new and interesting functions and features. It’s impossible to keep up with trying them all so that’s why we’ve decided to make this newspost as a recurring post everry month. And we were finally in January, it’s a brand new year. Do you have any plans or goals for the new years? Maybe get a gym card, or something simple like just start walking? December was incredible in many ways and it felt like the month passed so fast, it was not long ago that we released the last post with new christmas slots. However, during the last two weeks tons of new exciting slots has been released and in this list we’ve picked the five that we think stands out extra much.

Most people have played the classical board game Sinking ship when they were younger and now they have finally released a slot from Williams Interactive that is based on the famous board game and we have to say that it is incredibly well done. This slot uses the MegaWay feature that they rented from Big Time Gaming, which makes both the base and bonus game very exciting. At the top of the game board you will find an extra row of different ships that change for each spin and the goal is to sink these ships in order to win the bonus. The ships has different sizes and the larger, the more free spins they give if you manage to sink them. Once inside the bonus, these ships are replaced with different fixed jackpots where you can win up to 2500 times your bet. Very fun and exciting game that definitely deserves a first place on this list.

It’s time to look for the compass because we’re going on a treasure hunt in this new slot from Blueprint Gaming. The castle is based on the famous film The Goonies from 1985 and on the wheels we find different symbols that are known from the film. The slot’s theme is adventure and in the various bonuses we get out on exciting adventures with the boys in search of the hidden treasures. In total, the slot contains 5 different bonuses that are triggered by hitting three bonus symbols. Once you are inside the bonus you will be spinning a wheel and you win the bonus it lands on. If you feel extra lucky you can spin again for a better bonus, but then you also have the chance to win a mystery win instead so be careful. All in all, a very fun slot that contains many hours of entertainment.

Deep down in the underground caves, you can find fine diamonds and other rare minerals and in this slot we accompany the characters in search of the fine treasures hiding down there. Thunderkick is back with another lovely slot with lots of exciting features, bonuses and features and the castle has a fun theme with fun characters. The bonus triggers you to hit at least three bonus symbols, but if you manage to hit even more you’ll get additional spins. Once inside the bonus, it is important to collect Wild symbols as they are Sticky, which means that they remain in the same position for the rest of the bonus spin. There are also some random triggers that can happen in the bass game which makes it extra fun to spin!

Even if history may not have been your favorite subject in school, maybe it will change now. Battle Royal is a brand new slot from Play’n GO based on King Henry’s eighth and his six wives. In the castle we get to follow the king and his wives which he either separated from, cut off their heads, married and had lots of children with. Out of all these wives, it was only one who managed to survive his rather interesting temprament. In the slot we find several bonus features and random triggers that will entertain you for several hours. The bonus feature itself is extremely exciting as you can win up to 5000 times your bet with a little luck. Definitely a successful slot

Seeing new game releases from Merkur is quite rare nowadays, so when new slots come from them, they definitely make you very curious and interested in what they’ve done this time. Dragon & Knights is a brand new slot with a fairly obvious theme, and the slot’s layout is classic from Merkur with 5 reels, 3 rows and 20 paylines. On both sides of the castle you see two meters, the first meter is related to Free Spins and the other to Multipliers. The first meter extends all the way up to 20 Free Spins. When you manage to get to the top of any of the meters you will be offered Free Spins. To move up the level you need to hit the same symbol on the box at the bottom left and top right. All in all, it is a very exciting slot with extremely high potential for really nice profits just as Merkur is widely known for. Definitely a slot we recommend!

That was everything for this month. Hopefully you’ve found a slot that you find interesting or simply a new favorite. This will be a recurring newspost which will be released every month as a summary of the best slots from that month. We hope that just as many new and exciting slots will be released until next month!

New Slots to try in December

New Slots to try in February