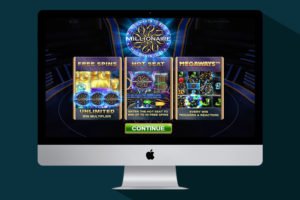 Ever since the casino industry exploded a couple of years back there has been a massive increase in providers which has resulted in new high-quality slots being released every couple of days with tons of interesting and unique features. It’s almost impossible to keep up with them so that’s why we’ve decided to make this news post as a recurring post every month. Here we go through our top five slots for the month and this time it’s November. Halloween is in just a couple of days then we’re heading onto Christmas which is just under two months away now so we expect to see many Christmas themed slots during these two months. Today we actually already have one called Jingle Spin from NetEnt, a fantastic remake from their previous classic Eggomatic. Anyway, here’s our top five!

First out is a slot we’ve been anticipating for a very long time now. A couple of months ago NetEnt announced that they got the rights to make a slot based on the famous TV-Series Vikings, and this slot is expected to be released in just a couple of days. Here you’ll get to follow the Vikings as they have to use their strength and guts to survive the hard times. The slot has many interesting and unique features such as Shield Wall, Hot Spots Scatter Pays and Raid Spins with transformation symbols. The graphics and animations are very well done and the soundtracks are very fitting making the slot incredibly exciting to play. We’re sure that this slot is going to become hot news as soon as it’s released. You’ll find it first on Mr Green and Vera&John.

Light Blocks is the latest slot from Merkur which has been very popular within the casino community the last two weeks and it’s incredibly fun. The slot is completely different from what most normal slots look like with wheels, rows, and pay lines. Instead, it uses blocks and your goal is to fill up the rows similar to Tetris but instead try to get as high as possible. For every row you manage to fill after your first five you’ll get an additional multiplier and you can reach as far as up to level 50 which will pay completely insane if you’re lucky. Merkur has always been known for their incredible potential and volatility and this slot definitely shows you what they mean. The slot is already released and you can find it today at Videoslots and SlotsMillion.

The christmas is less than two months away so it’s time for some Christmas themed slots. Jingle Spin is a remake from NetEnts older slot Eggomatic with an updated theme. On the wheels we find many things that many people associate with Christmas such as decorations, Christmas balls, oranges and cinnamon and so on. The slot contains features such as Walking Baubles and Free Spins. Walking Baubles works just like it did in Eggomatic where you have an rolling band ontop of the playfield with extra symbols and if you manage to hit an Wild you’ll win whats inside the baubles. This can be coin wins or Free Spins. The animations and graphics is also very well done and an christmas jingle is playing in the background which definitely sets the christmas mood. This slot is also expected in a couple of days and you’ll find it first on Energy Casino and Kaboo.

Get yourself ready for some mesmerising magic tricks from this awesome magician in Play’n GOs latest slot Street Magic. This slot takes you down to the underworld of illusionists and magicians and shows you some magic tricks that definitely will make your wallet bigger. The street performer will entertain you with his crafts and the bonus has potential of paying upwards of five thousand times the stake if you’re lucky. On the wheels we find things that many people associate with magicians aswell as tools that are common for the tricks. The game has three different random triggers with magic tricks aswell as an bonus feature. The slot has already been released and you’ll find it on Rizk Casino and Unibet.

Who Wants to be A Millionaire

Most people probably know about the famous TV Game Show from 1999 ‘Who Wants to be a Millionaire’ where one person gets invited and gets to answer questions with the chance of winning the million. Big Time Gaming has now decided to make a slot based on this show and this slot will be most volatile than ever. I want to be a Millionaire uses BTG’s own developed features V-Gamble and MegaWays and in the bonus feature you’ll be able to get up to 50 Free Spins with Unlimited Multiplier similar to Bonanza and Extra Chilli. We still don’t know the exact release date for this slot but it’s expected at the end of 2018.

That was all for this month. Hopefully you found an slot that you find interesting or maybe even a new personal favourite. This will be an recurring news post that will be posted as an summary every month with all the new slots that was released during the month. We hope that just as many new and innovative slot machines will be released next month!

New Slots to try in October

New Slots to try in December