Viking Clash is made by Push Gaming, a company that specializes in making high quality slots with innovative and interesting bonus features. In Viking Clash we get to follow the Vikings as they go out on adventures and plunder the nearby villages for food, gold and women. Viking Clash is definitely one of Push Gamings most successful slots, mainly because of the very high quality of the game but also because of the exciting bonus features which gives the player an chance of winning upwards of 13 000 times their stake. This slot can be found on all casinos that offers Push Gaming slots and we can promise the player hours of entertainment with this new and brilliant game!

Today there are a few very popular themes within the casino industry and one of them is definitely Vikings. Viking Clash is the latest slot release from Push Gaming and definitely one of their best slots so far with amazing graphics, details and tons of fun. Follow the Vikings as they venture out to plunder the nearby villages for their food and gold.

Viking Clash consists of two seperate playfields with 5 wheels, 3 rows and a total of 25 paylines per field. You can change the bet size as you please between 0.25 Euro – 100 Euro per spin, there are many different bet levels so that you can find the one best suitable for your balance and it’s easily adjustable by clicking the coin symbol in the middle of the menu below the game.

As previously mentioned, the overall theme of the slot is Vikings and the slot is played out at at a boat in the middle of the ocean. This definitely gives the sense of adventure that you’re about to experience. On the playfield we find many different vikings acting as the premium symbols, we also have some weapons that the Vikings were known to be using such as axes and hammers. As for the low paying symbols we have different stones with runic writings and symbols on them. The game has two different features, one random trigger that can happen at any point in the game and also the bonus feature which is triggered by the Scatter symbols.

The random feature that we mentioned earlier is an Wild Boat that randomly appears when playing in the base game. This boat rolls over the screen leaving behind Wild symbols that helps you build paylines which can lead to really nice winnings. The amount of Wilds is completely random.

As for the bonus feature you trigger it by hitting three catapults in total anywhere on the two playfields. You’ll then be awarded with 6 Free Spins and your Scatter catapults will shoot over one Wild symbol to a random position on the other playfield. For every additional Scatter you hit during your Free Spins you’ll get 1 more spin aswell as one more Wild on the other playfield. If it sends an Wild to the same position as an previous Wild you’ll get an multiplier on the Wild instead. 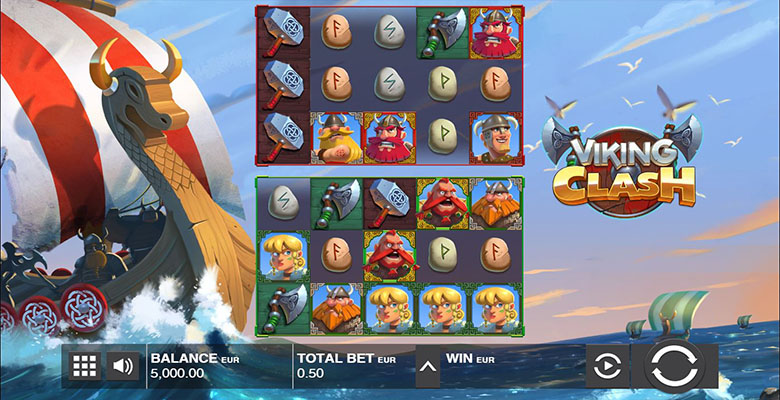 The viking theme is today very popular and it’s easily noticable when looking at popular games on most casinos, at the top you’ll almost always find something about Vikings so it was definitely about time Push Gaming made something similar to this theme. The graphics in this slot is very modern and the slot is played out in the middle of the ocean on top of a boat. This location is set to give the player an sense of adventure and it’s very well done. The Animations is top notch and the sound track of Vikings in the background definitely fits the theme. Every spin you play on Viking Clash is exciting and everything comes together perfectly, this is by far one of the best slots Push Gaming has released both in terms of Graphic quality and innovative features.

The Vikings seem to fascinate many people, us included, and it’s a very popular theme within the casino industry and this is something that Push Gaming took to their advantage. Viking Clash is a slot played out ontop of a boat in the ocean and the player gets to follow the Vikings as they plunder nearby villages. This slot has many interesting and innovative features which Push Gaming is previously known for, the features also hold incredible potential with the chance of winning upwards of 13 000 times the stake. This is nuts and almost at Big Time Gaming level of volatility. If you like adventure and are a fan of the Vikings we definitely recommend that you try out Viking Clash. You’ll find this slot at most popular casinos today!